Amazon’s subsidiary Amazon Web Services (AWS), the cloud-computing business, was among the first to offer IT infrastructure services to businesses in the form of web services, now commonly known as cloud computing. When Amazon started AWS in 2006, it was not so popular. For that reason, it was affordable and only a handful of startups used the AWS. It now has more than a million active customers in 190 countries around the world who uses their web services without having to operate and maintain the underlying data center hardware. They have data center located in the US, Europe, Brazil, Singapore, Japan, Australia, and they recently expanded to China. Some of their customers include Hulu, Lyft, PBS, CDC, NASA/JPL, and The US Department of State. 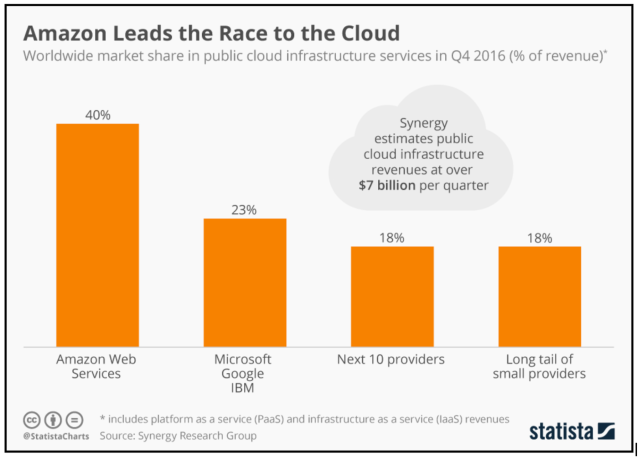 Amazon Leads the Race to the Cloud (Chart Source: Statista)

The chart shows the worldwide market share in public cloud infrastructure services in the Fourth Quarter of 2016, and Amazon has already capitalized the market share establishing itself as the leader in this category. Amazon’s Web Services alone accounted for 40% of the global revenue, compared to 23% by Microsoft, Google and IBM combined (Richter, 2017). Amazon has turned its AWS business into a dominant retailer that generates well over $10 billion (US dollars) in revenue annually. You could say Amazon has become like the Walmart of the Internet.

Amazon.com’s net revenue from the retail subscription services segment like Amazon Prime in 2016 was $6.39 billion (US dollars). In the same year, the revenue AWS generated was circa $12 billion (U.S. dollars). According to the recent survey conducted in September of 2017, it was estimated to be about 90 million Amazon Prime members in the US. Similarly, it was found that Prime members spend an average of $1,300 compared to $700 (US dollars) by non-Prime members on online shopping every year.

According to the Amazon, they now have more than a million active customers around the world who uses their Amazon Web Services (AWS). Some customers include:

According to the financial report published by the Amazon.com, Inc. (NASDAQ: AMZN) for its first quarter that ended in March 2017 reports the AWS revenue, which is included below:

Note: Amazon.com’s net revenue from the retail subscription services like Amazon Prime in 2016 was $6.39 billion (US dollars). In the same year, the revenue AWS generated was $12 billion (U.S. dollars).

The US e-commerce giant Amazon is expanding its cloud footprint in China by partnering with Ningxia Western Cloud Data Technology Co. Ltd (NWCD), a cloud service provider in China. The announcement was made in Dec. 11, 2017.

China may be the fastest-growing, but it is one of the most competitive markets in the world. It is particularly difficult for foreign companies to enter the Chinese market without establishing a partnership with local companies. Amazon-NWCD partnership would enable NWCD to offer Amazon Web Services (AWS) products in China on behalf of Amazon. There are more than 100 products offered through Amazon Web Services, including Computing, Data Storage, Data Management Tools, and more.

Netflix, the world’s leading internet TV network, was among the few companies to use Amazon Web Services. Netflix uses AWS for almost all of its computing, storing, and streaming from the servers Amazon own. Similarly, Amazon uses the same server to store and stream their own content, Amazon Instant Video, which is also one of the biggest Netflix’s competitor. All the network traffic that comes from the Amazon’s server is estimated to be more than a third of all Internet traffic in North America as of May 29, 2015.

According to Netflix blog post, users around the world collectively watched more than 140 million hours per day in 2017 (i.e. More than 1 billion hours per week). It is AWS that enables Netflix to analyze all the data as well as process billions of traffic flow. And perhaps most importantly, AWS enables Netflix to ensure smooth streaming without compromising its quality.

Note: Netflix has hit a new milestone with market-cap of more than $100 billion (USD) and 117.58 million streaming subscribers around the world. The year 2017 was one of Netflix’s best yet for subscriber growth. According to the Reuters news, more than half of all U.S. broadband households now have Netflix accounts (Jan. 22, 2018). In the fourth quarter of 2017 alone, Netflix added 8.34 million new subscribers worldwide (6.36 million subscribers in the international market and 1.98 million in the U.S.). Netflix is expecting to add 6.35 million new subscribers in the first quarter of 2018, Reuters added. (Updated on Jan. 23, 2018)

Market value during the first quarter as of July 26 for 2017. (Source: The Seattle Times)

Amazon, officially founded in 1994, launched their website Amazon.com a year after, initially as an online bookstore. After immediate success, it expanded to include music and video store. It now sells almost everything including books, music, movies, and housewares. What many people do not know is Amazon’s hidden business that has been fueling its big growth and rapid expansions.

Amazon Web Services, launched in 2006, was initially only used by a few startups. It now has more than a million customers in 190 countries around the world and generates well over $10 billion in revenue annually. Amazon could become an operating system for all e-commerce businesses. AWS has a very strong annual revenue growth rate- providing them a dominant market position in a rapidly growing industry. In 2017 alone, Amazon.com Inc. (NASDAQ:AMZN) stock gained 58% (CBS/AP, 2017). At the rate it is growing and expanding, Amazon could be a trillion-dollar company in just a few years from now.

The Jeff Bezos Empire in One Giant Chart

Update: November 13, 2018, Amazon announced that New York City and Arlington, Virginia, will be the locations of its second headquarters. The online giant began with a list of 238 possible locations a year ago, saying it would add up to 50,000 workers at its next headquarters — and surprised with the decision of splitting HQ2 into two locations. Amazon also said that it will open a new operations center in Nashville, adding more than 5,000 jobs there.

Luckerson, V. (2015, May 29). Netflix Accounts for More Than One-Third of Internet Traffic. Retrieved from http://time.com/3901378/netflix-internet-traffic/

STAY IN THE KNOW

The New York Times is offering free digital access to its coverage of the coronavirus outbreak. You can find the latest national news on the pandemic by going to www.nytimes.com/news-event/coronavirus, Or you can visit Johns Hopkins’ interactive dashboard features real-time data on reported around the world: CLICK HERE.

Tap A Language You Read

LATEST NEWS AS IT BREAKS